Since Mosul’s liberation, Sawaed al-Museliya (Muslim) volunteer are helping people in need and wiping away the traces of the Islamic State. At present, they are clearing the Syriac Catholic Church of St Thomas. They urge families that fled to “Come back, Mosul is not complete without you.” 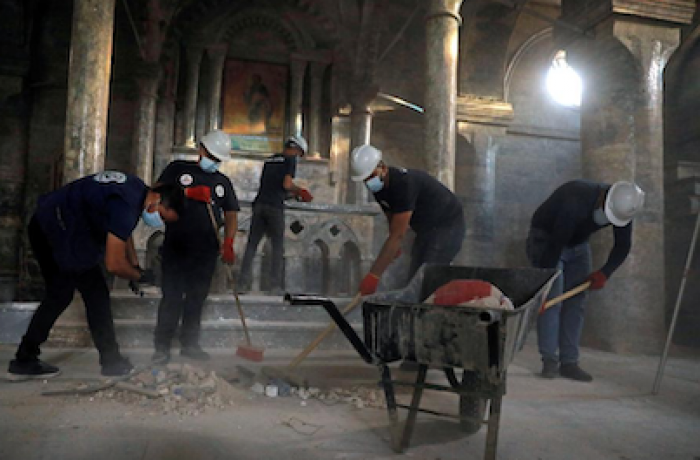 MOSUL: A group of young volunteers has been working on restoring certain historic buildings in Mosul (northern Iraq), including Christian churches, in an attempt to heal the wounds caused by years of rule by the Islamic State group (IS).

One of them is Mohammed Essam, co-founder of the group. For him, this work “is a message to say ‘Come back, Mosul is not complete without you.’”

At present, he and other Muslim volunteers are clearing dust and debris from St Thomas Syriac Catholic Church.

Built in the mid-19th century, the church was plundered and destroyed under the so-called caliphate after IS seized the city and much of the Nineveh Plain in 2014, forcing Christians, Yazidis, Sabian Mandaeans and some Muslims to flee to Iraqi Kurdistan.

IS was eventually expelled in the summer of 2017 but during its rule, it carried out a policy of violence and terror, devastating highly symbolic sites like the al-Nouri mosque and Our Lady of the Hour Church (Al-Saa’a Church).

After it was sacked in the summer of 2014, Saint Thomas was left in disrepair, on the verge of collapse. Now the group of young volunteers want it to become a symbol of rebirth.

They are trying to cleanse away the brutalities and horrors of IS rule, like the Arabic graffiti “Land of the Caliphate”, scribbled on one of the walls of the church, a reference to the group’s goals for the entire Middle East.

Essam, who experienced first-hand the atrocities committed by the men of IS leader al-Baghdadi, now wants “to change the perception people in the region and beyond have about Mosul. We want to say that Christians belong here. That they have a rich history here.”

Since the city’s liberation, the “Sawaed al-Museliya” (Arms of Mosul) volunteer group has provided community services, including emergency food support and raising funds for rebuilding homes that belong to the city’s poorest residents.

By clearing up the church, they also want to support the local Christian community’s efforts to restore damaged properties and prepare the ground for the return of those who fled ethnic and confessional violence.

“[W]e are committed to take care of them and of their places of worship,” Essam said. However, so far, only about 50 Christian families have returned to live in the city so far, although more come to work or study each day.

“Our youth are the hope of this city after it suffered so many difficulties and problems,” a local Christian said. “It was in a tunnel of darkness.”––Asia News

Local Church Offers Thanksgiving Dinner for Those in Need

Volunteers want Christians to return to Mosul, where Islamic State once ruled