by Penny Sarver
in Local News
0


If you experience problems at your polling place today, email editor@decaturish.com and put “voting problems” in the subject line.

All of our elections coverage can be found at Decaturishvotes.com. If you appreciate having coverage of our local elections and Elections Board, please sign up to become a paying supporter. For as little as $3 a month, you can help us continue to provide you with quality local news. To sign up, click here. At 5:40 p.m. in Kirkwood, Andrea Zoppo ‘Miss Ladybug’ & Melanie Sharon were spreading joy and “trying to make people feel proud of our country’” in front of Israel Missionary Baptist Church. There were no voters present at 5:40 p.m., but there were 290 voters so far today.

The Black Voters Matter organization has released a statement advising voters that they have the right to cast their vote whether they have their absentee ballots with them or not.

BREAKING: We have received reports from multiple counties in GA from voters who have been incorrectly told that they must have their absentee ballots with them in order to cancel them and vote in person. You have the right to cast your ballot. Questions? Call 866-OUR-VOTE #gapol pic.twitter.com/IbbGhRUsom

COVID-19 drove the high numbers of early and absentee voting Georgia has seen this year. Today, the state reached another grim milestone: More than 8,000 Georgians have died from COVID-19. For the full story, click here. We have received some questions about turnout numbers today, but people we’re speaking to say we won’t have much data on that until the polls close.

Here’s what we do know. A DeKalb County spokesperson told Decaturish, “At 12 noon, preliminary numbers showed approximately 21,000 voters across DeKalb today [Election Day]. An update can be made at 6 p.m. on those numbers.”

Of course, more than 300,000 voters in DeKalb County voted early.

Stephen Fowler, a political reporter at Georgia Public Broadcasting, has some thoughts about that number …

We could have fewer than 800,000 people TOTAL vote in-person in Georgia today, which is how many voted on June 9 in the primary with long lines!

My mind is blown. https://t.co/1KODXYNaDk

It’s almost a certainty that the special election for US Senate will go to a runoff, and @ossoff v. Perdue could too. That means months more campaigning when we could have it all decided tonight in the most democratic way possible.

NACA (Neighborhood Assistance Corporation of America) has partnered with House of Hope Atlanta to provide rides to the polls for citizens in DeKalb County and throughout Metro Atlanta. If anyone is in need of a ride, please call 1-888-495-6222 or visit https://t.co/Bp2jtwizPS

Here’s a photo from George Chidi, who is out and about visiting voting sites today. 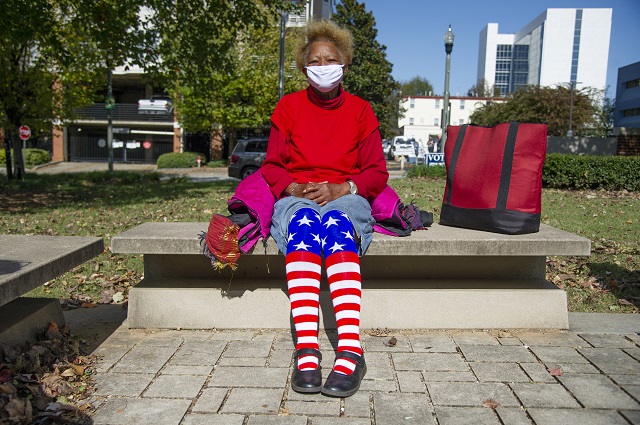 Sarah Elizabeth who said she voted early wears patriotic socks while sitting in front of the Decatur Recreation Center on November 3, 2020. Photo by Dean Hesse.

Sarah Elizabeth was passing by the Decatur Recreation Center on Tuesday morning with her red, white and blue socks to be festive for Election Day. She voted early on Friday, Oct. 30, at Agnes Scott College and did not experience any issues while voting.

“I didn’t want to be standing in a line and waiting for hours possibly because I’ve done that before in years past. I wanted to go ahead and get it over with,” Elizabeth said about voting early.

She said she was also encouraged to vote early due to getting multiple messages asking if she’d voted or if she needed a ride to her polling location.

Elizabeth primarily votes because of the amendments on the ballot.
“The main reason I vote, regardless of who’s running, are the amendments because I know there’s always amendments to change the laws. I try to read those very carefully,” Elizabeth said.

She is hoping for a peaceful outcome, no matter who wins.

“I’m just hoping it’ll be peaceful regardless. I don’t want to see people smashing walls and windows and all of that angry mess that they do when the person they want to win doesn’t,” she added. “If Trump wins I don’t want people tearing up stuff because nobody knows what’s going to happen to tell you the truth.”

“I proudly cast my vote during early voting, as did thousands of my Tucker neighbors. Today, thousands more will head to the polls to make their voices heard – free to choose those that they believe best represent them. Tucker is home to a great diversity of thought, which allows us to grow and learn from each other. No matter who is elected, we will continue to focus on what truly matters; loving our neighbors and building a better community for future generations.”

Decaturish also is doing some live-streaming on its Twitch channel today. To view our broadcasts, click here.

MARTA is providing subsidized UBER rides to 99 polls in the area:

Voting hours have been extended for two DeKalb County polling places, according to a press release from the county.

DECATUR, GA. – DeKalb Superior Court Judge Courtney L. Johnson has signed an order approving a petition by the Board of Registration and Elections to extend voting for two DeKalb County polling places that opened late this morning.

This extension was requested, in an abundance of caution, to ensure that all electors at the locations have the required full 12 hours of voting. Questions on this matter should be referred to the Registration and Elections office at 404-298-4020.

Wait times to vote are down to just 2 minutes across Georgia, according to the Election Performance Dashboard.

Power issues affected three polling cites in Gwinnett County, according to the AJC.

Reporter Zoe Seiler checks in with some numbers. “As of 11 a.m., 244 voters had cast ballots at Avondale Estates City Hall. As of 11:45 a.m., 73 voters voted at the Clairmont East precinct and as of 11:50 a.m., 68 voters cast votes at the Glenwood precinct. Both of those locations are at the Decatur Recreation Center.”

Meanwhile, a source working elections in Fulton County provides this report from 1:30 p.m.:

“Just checked in as a poll monitor at Scott Elementary on Hollywood Road in Fulton. One voter in last 5 minutes, no tech issues, apparently been this way all day. Lotta bored poll workers.”

Throughout the day, volunteers have provided food, PPE, and even music at polling places.

A harpist is playing for voters at the precinct in watching #Election2020 #vote #gapol pic.twitter.com/J1Li1fnKrO

No long lines this morning at the Pittman Park Recreation Center in Southwest Atlanta. But the Groove Masters Brass Band is livening up the mood for anyone who walks by. pic.twitter.com/eDjxA0P8zo

We are getting some reports of voters being told they already voted absentee or early, but that those issues are being quickly resolved. We’re also being told some polls may have their hours extended due to equipment issues. When we have more information, we will share it. Remember: if you are in line at 7 p.m., you can still vote.

We’re chasing reports about voter problems and reports of low turnout in south and east DeKalb County. Overall, voting today has been smooth with only scattered issues cropping up in our community.

Kiki Kantzas-Allen, her husband, Mark Allen, and their son arrived at Lakeside High School at 6:40 a.m. ready to vote when the doors opened at 7 a.m. Allen is a first-time voter in the United States as he became a citizen this year. Allen, originally from Australia, went to the polls with a small American flag in hand ready to cast his ballot.

“It was good,” Allen said. “Not getting vocal by anybody out here which is good.”

In Australia, people campaign at the voting places, Kantzas-Allen explained.

“My theory is if you don’t vote, you can’t have an opinion either way,” Allen said.

Here are the reporters who will be working on election coverage for us today.

– Contributor Zoe Seiler and photographer Dean Hesse will be visiting local polling locations and speaking with voters about their experiences on election day.

– Contributors George Chidi and Gabriel Owens will be on the lookout for voter intimidation occurring at our polling places.

– Contributor Logan C. Ritchie will be following up on reports of problems at the polls provided by our teams out in the field and our readers. If you experience problems voting on Election Day, email us at editor@decaturish.com and put “voting problems” in the subject line.

Polls opened at 7 a.m. and close at 7 p.m. If you are still in line when the polls close, you will be allowed to vote.

People who wish to vote early and in-person will need to bring one of the following forms of identification, according to the Georgia Secretary of State’s office:

– Any valid state or federal government-issued photo ID, including a free ID Card issued by your county registrar’s office or the Georgia Department of Driver Services (DDS)

– A Georgia Driver’s License, even if expired

– Valid employee photo ID from any branch, department, agency, or entity of the U.S. Government, Georgia, or any county, municipality, board, authority or other entity of this state

The polls offer audio ballots for voters who are blind or have low vision and booths for voters in wheelchairs. If you need help with your ballot, you can ask a family member or friend to come with you to the polls and fill the ballot in with your choices.

If you vote on Nov. 3, find your polling location by visiting the Georgia Secretary of State’s My Voter Page. You can also use the website to check to see whether your absentee ballot was accepted.

People who vote on Election Day might find that they have a precinct different than the one they usually use. The precinct changes are causing some confusion today, but volunteers have been directing people to the correct locations.

According to DeKalb County, “Many of the previous precincts were used on an emergency basis during the June 9 and Aug. 11 elections, while additional precincts were changed to provide additional space for social distancing and to better accommodate larger crowds. Additionally, secure ballot drop boxes [for absentee ballots] have been added to the Kirkwood Library and Lithonia City Hall.”

Here is a full list of the precinct changes voters will encounter if the vote on Nov. 3 instead of voting early. Changes will also be posted at www.DeKalbVotes.com

If you appreciate our work on this story, please become a paying supporter. For as little as $3 a month, you can help us keep you in the loop about your community. To become a supporter, click here.

Want Decaturish delivered to your inbox every day? Sign up for our free newsletter by clicking here.