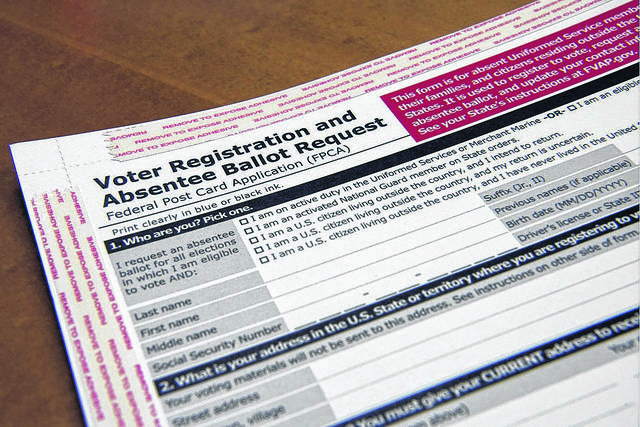 LUMBERTON— Local officials had mixed reactions to the Supreme Court’s Wednesday decision to affirm the lengthened period absentee ballots will be received and counted following Election Day in North Carolina.

The justices, by a 5-3 vote, denied the request to change the decision by the State Board of Elections to lengthen the period from three to nine days after Election Day because of the coronavirus pandemic, pushing back the deadline to Nov. 12.

The board’s decision was part of a legal settlement with a union-affiliated group.

Chief Justice John Roberts and Justice Brett Kavanaugh joined the three liberal justices in the majority. Three conservative justices, Samuel Alito, Neil Gorsuch and Clarence Thomas, dissented. New Justice Amy Coney Barrett took no part in the case because of the need for a prompt resolution and because she has not had time to fully review the parties’ filings.

Local democrats praised the Supreme Court’s decision stating that the extension will guarantee all votes are counted.

“I do agree with it because our mail service is sometimes late in delivery,” said Pearlean Revels, chair of the Robeson County Democratic Party. “They’re doing the best they can but it’s a big influx.”

Revels said the record number of turnout has the possibility of overwhelming the postal system.

“Its a heavier turnout then what we’re accustomed to having,” she said.

The additional six days is just assurance that every vote is counted, she said.

“That’s just added security,” she said. “Like I said, the mail delivery can be rather slow sometimes.”

Revels does believe this will have a major impact on when election results are finally made available but said it is a necessary sacrifice to be sure every vote is counted.

“I’ve always felt that if a person took the time to vote then their vote should be counted,” she said. “All people should have the opportunity to vote.”

“We know what the issues are with the mail service,” Graham said. “It’s slow and it’s cumbersome right now.

“I think our citizens need to feel very secure in casting their votes.”

Graham said he doesn’t think allowing a nine-day window after Election Day to receive the votes is “extreme.”

The decision instead “sends a strong message” to voters that each vote will count, even during the COVID-19 pandemic, he said.

Graham said there is a possibility that the mail-in ballots could affect the outcome of the election if it is a close race.

“We may not know the outcome of their vote on election night.”

But the representative said he thinks Americans will have a good idea where the nation stands on its presidential pick on election night.

“Just because there is a conservative majority on the bench doesn’t mean Republican arguments win every time,” Stephens said.

As far as the decision, he doesn’t see much change in results by having the process extended.

“Ballots still must be mailed by Election Day,” Stephens said. “It simply extends counting time in expectation of increased volume.”

If asked the question before early voting, Stephens thinks there would be more reaction to the decision.

“But after having some early voting data, the extension may not be a major factor at all in the end,” he said.

“We think there we be a higher than normal unreturned mail in ballot rate,” he said.

Sen. Danny Britt, a Republican, said that absentee ballots should be used if someone has medical conditions, is in the military or will be out of town and cannot vote in-person.

“That’s when the absentee ballot is appropriate,” he said.

Britt also said the mail-in voting is “extremely important” to allow voters to avoid COVID-19 exposure, and commended the State Board of Elections for its extra safety precautions and curbside voting measures to make voting safer.

“I want every vote to count,” he said.

However, Britt said he has seen cases of ballot harvesting in Robeson and Columbus counties, noting that some healthcare companies have filled out ballots for patients.

“I have personally witnessed people come into the Board of Elections with a family member that they (Robeson County Elections Board) have reported have already turned in an absentee ballot,” he said.

But, steps like postmarking ballots by Nov. 3, having a witness signature and a log are ways to keep votes legal.

“I think we’ve got the protections to prevent fraud,” Britt said.

He still disagrees with the Supreme Court’s decision.

“The Board of Elections tried to circumvent that law by passing a policy that says nine days,” he said.

Britt said he felt the Board of Elections overstepped its authority by drafting the policy. He also said he doesn’t agree with the increased time, because he sees no reason that mail could be delayed for longer than three days.

Britt also said he has not received notification of significant delays from the U.S. Postal Service that would warrant the six-day extension.

The State Board of Elections had lengthened the period as part of a late-September legal settlement with the North Carolina Alliance for Retired Americans, a union-affiliated group represented by Marc Elias, a lawyer prominent in Democratic circles. The legal settlement, which also loosened requirements for fixing absentee ballots that lacked a witness signature, was approved by a state judge. The settlement said counties should have longer to accept ballots because of possible mail delays.

“This is the first of two similar, but not identical, cases pending before the U.S. Supreme Court involving the mid-election rewrite of North Carolina’s election laws,” said N.C. Senate Leader Phil Berger. “The precedent set in this year’s Supreme Court decisions will determine the future of America’s elections.”

Berger said that the question is can “unelected bureaucrats on a state panel controlled by one political party overrule election laws passed by legislatures, even after ballots have already been cast?

“If public confidence in elections is important to our system of government, then hopefully the answer to that question is no,” he said.

The decision brings no real change in operations at the local board of election, said Tina Bledsoe, the director of the Robeson County BOE.

“This decision was made weeks ago and we’ve been prepared for it,” she said.

The Reopening of Seven Cities Church